The FIDO® Alliance offers a suite of tests known as the "Conformance Self-Validation Testing". These tests enable developers to verify their Relying Party's (RP) adherence to FIDO specifications.

The WebAuthn API is built on top of FIDO2, and so implementations of WebAuthn can also become FIDO conformant. WebAuthn implementers that go this extra mile add an additional level of validation of the authenticators that interact with their RP.

As of v0.7.0, the @simplewebauthn/server package is FIDO conformant! Support for this additional level of authenticator scrutiny is opt-in - see usage instructions for MetadataService for more information.

It is important that the SimpleWebAuthn project remains FIDO conformant. To enable others to validate conformance and keep the project honest, a step-by-step list of instructions for running FIDO conformance tests against the library are included below.

FIDO conformance testing requires downloading the FIDO Conformance Tools application. If you don't already have it, you can submit a download request by filling out the Test Tool Access Request form.

You can now verify FIDO conformance of SimpleWebAuthn by following these steps:

Setting up the Example Project​

Follow the instructions in the Example Project's Getting Started section.

Make sure the example project is available at http://localhost:8000 before continuing!

Create a .env file and add the following environment variable:

This will add additional routes on the /fido route.

You will next need to load "metadata statements" from the FIDO Conformance Tools to ensure that all required tests pass.

Open up the FIDO Conformance Tools and click the Run button on the FIDO2 Tests card: 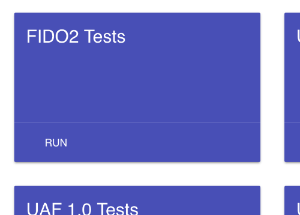 Next, scroll down and click the DOWNLOAD SERVER METADATA button on the right-hand column, under TESTS CONFIGURATION: 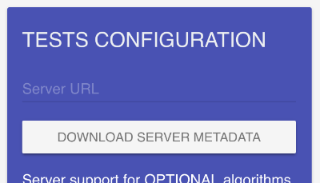 This will download a metadata.zip folder to your computer. Unzip the JSON files within and place them into the example/fido-conformance-mds/ directory: 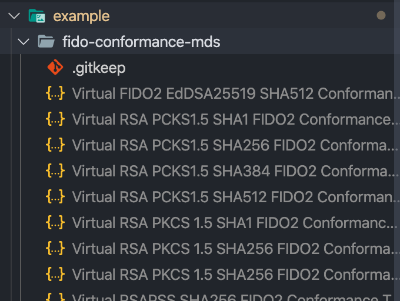 Start the server once everything is in place:

An API request will be triggered by the activation of the conformance routes that pulls in additional metadata information required for the Metadata Service Tests. When the example server is ready for testing, you should see the following console output:

To start conformance testing, open up the FIDO Conformance Tools and click the Run button on the FIDO2 Tests card:

On the right-hand column, under SELECT TESTS TO RUN, check the box next to Server Tests: 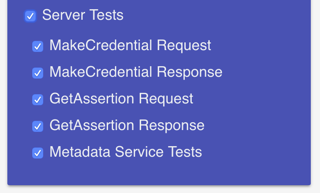 Next, scroll down and look for the Server URL text box on the right-hand column, under TESTS CONFIGURATION:

Enter the following URL into this text box:

It's finally time! Click the Run button on the bottom-right corner of the window to start conformance testing:

When the tests are completed, results for FIDO Conformance Tools v1.3.4 should look like this:

Below are errors you may see while trying to run tests, and potential solutions to them:

You may see a series of "Failed to fetch" errors:

Solution: Make sure the server is available at http://localhost:8000, and that you've activated the additional FIDO Conformance-specific routes.

"Unexpected token < in JSON at position 0"​

You may see a series of "Unexpected token" errors:

You may see a series of "Unlisted aaguid" errors:

Solution: Make sure that you've loaded the metadata statements from the FIDO Conformance Tools